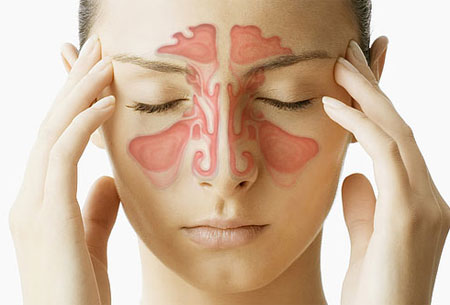 The sinuses are air-filled sacs in the facial bones of the head. They have several functions, including warming incoming air and helping to form certain sounds. When the sinuses become infected and inflamed, the condition is known as sinusitis. Sinusitis ranges from a minor annoyance to a serious condition that might require surgery.

The sinuses are lined with cells covered with small, hair-like projections called cilia, which help clear mucus from the chambers and keep them bacteria free. When the ability to clear the passageways is blocked, however, the sinuses may become infected. Sinusitis is classified by duration of illness (acute or chronic), by cause (infectious or other), and by the type of infectious agent involved (bacterial, fungal, or viral). Even if it is not considered serious, sinusitis can have a major impact on quality of life. In rare cases, sinusitis can cause infections of the brain and other complications.

Researchers in Japan have found a link between chronic sinusitis in older people and cognitive impairment. A study of an older population found significant differences in Mini-Mental Status Examination. Examination scores between people with chronic sinusitis and those without underscore the importance of treating sinusitis infections appropriately in this age group.


The four pairs of sinuses are listed below, in order from highest frequency of infection to least:

Causes and Risk Factors for Sinusitis

Acute sinusitis is almost always caused by bacteria, fungi, or viruses. Bacteria that cause sinusitis include streptococcal and staphylococcal strains, which also cause the common cold. Fungi are known to cause sinusitis, but mainly in immunocompromised people or people who are sensitive to fungi People at highest risk for sinusitis are those with allergies, asthma, or an increased immune response to fungi; smokers; or those with compromised immune systems.

No single test confirms a diagnosis of sinusitis. In most cases, the diagnosis will be made on the basis of symptoms, which depend on which sinus or sinuses are affected. Common symptoms include: