My name is Brenda Hetherington and I am the owner of Salt Therapy Ireland, which opened during the recession in October 2011 following the collapse of the “Celtic Tiger” in 2008, and this is my story. My journey with Salt Therapy began with my Father, Thomas O’ Neill. 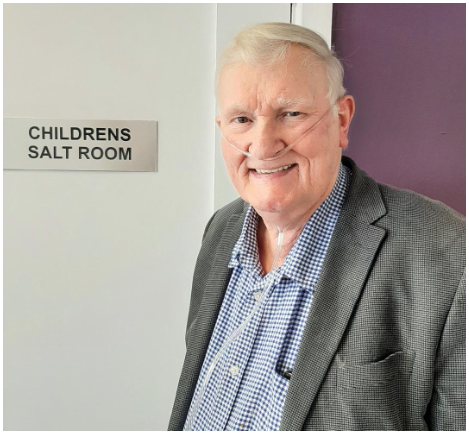 Dad is 76 yrs old and has COPD (Chronic Obstructive Pulmonary Disease), which is a progressive lung disease that affects his ability to breathe. He was in his 50’s when he developed the condition and it was not so bad for him for the first 5 to 7 years after diagnosis, but by the time he was in his 60’s his condition had worsened and he was classed as a medically disabled man. He was suffering with many of the debilitating symptoms of COPD; shortness of breath, persistent cough, and reoccurring chest infections – which regularly landed him in hospital and weakened his lungs each time. He was constantly medicated with antibiotics, steroids, nebulisers and oxygen; he found it difficult to walk without getting very breathless. He wasn’t able to attend family functions. He could not take two steps up a flight stairs. He just puffed and panted and coughed all day. He didn’t go out and just politely asked us to leave him be because he just could not do it anymore, he was at the end of his struggle with COPD and as a family, we struggled seeing our beloved Dad this way.

I had done extensive research into the benefits of Salt Therapy, and in 2011 I opened Salt Therapy Ireland in my home town of Newbridge, Co. Kildare. My Dad, was quite ill at this stage, he was very short of breath and his COPD was worsening.

Over the years, Dad was a regular in Salt Therapy, he had little or no chest infections and his once regular hospital admissions were getting few and far between. At one hospital appointment, his Consultant noted that he had not been hospitalised for his COPD in 5 years. Salt Therapy, along with his regular COPD medication regime was working wonders for him. His regular visits to Salt Therapy helped him to clear sticky stubborn mucous from his chest, which kept infections at bay and kept him out of hospital, it also opened his airways, allowing him to breathe more freely and enjoy a better quality of life and I truly believe that Salt Therapy not only prolonged his life, but saved his life.

Today, 10 years after I opened Salt Therapy, Dad is still living with COPD but he says he feels better now than he did 10 years ago. I truly believe that without Salt Therapy my Father would not have the dramatic improvements in his health and quality of life.

I am very proud to own Salt Therapy Ireland. I love my work and love that it gave our Dad a better quality of life, I love meeting our wonderful clients, a lot of whom are regulars and now our friends and you will see this if you ever visit us. Our clients come back to us year after year and we are always so glad to see them, to chat to them, to help them.