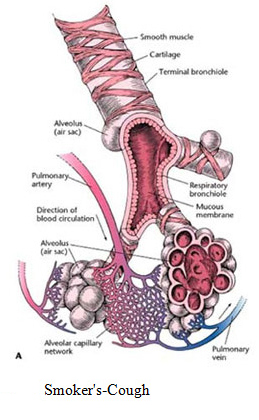 Smoking is associated with a wide range of ill effects to your health and those around you and Smokers cough is one such ill effect. Smokers cough is particularly seen in long term chronic smokers who are addicted to the habit for a prolonged period of time. Most new smokers usually do not develop this condition. Many consider that the onset of smokers cough is a strong indication from the human body that smoking has started to cause irreparable loss. Apart from smokers, smokers cough is also seen in people working in unhealthy environments. For example, it has been observed to appear in people who work in environments that exposes the body to lung, nasal and throat irritants.

Just like smoking, continued long term exposure to these irritants becomes harmful to health and could ultimately lead to smokers cough. The cough is broadly categorised into two, one is the dry cough and the other one is the chesty cough. The characteristic that separates these two coughs are that the chesty cough is accompanied with a lot of mucus. Both are equally painful and need to be seriously considered for further treatment.

The human nose and the trachea have small tiny fibres known as cilia. Their primary function is to keep harmful irritants from entering into the human body. Long term smoking affects the functioning of these cilia and it reduces the effectiveness of the cilia thus ultimately leading to a situation where in the cilia become totally non-functional. This is one of the main smokers cough symptoms. The smokers cough problem is worse while sleeping at night as the cilia no longer remains capable of moving the phlegm to the throat where it can be swallowed to get relief. Thus, most people suffering from smokers cough suffer from phlegm in their throats especially when they wake up in the morning.

The primary smokers cough cause is smoking itself though there are cases wherein people in particular environments have reported smokers cough symptoms. Thus people working or living in environments that expose them to nasal, lung or throat irritants are also one of the smokers cough causes. Many smokers are made to believe that the toxins inhaled during smoking are exhaled when the smoke leaves the body. This is not true as the body because of its inherent nature absorbs much of the toxins. Once these toxins are inside the human body, they usually start to destroy the defence mechanisms and starts reducing the immune levels. As the immune levels are lowered, the individual is directly affected by smoking but also becomes susceptible to other infections including viral and bacterial.