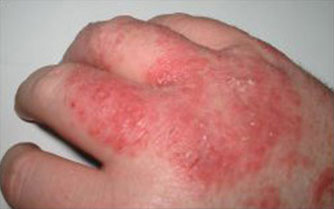 In addition to the clinically proven beneficial effects of Salt Therapy for respiratory disorders, Salt Therapy is also shown to be effective in the treatment of skin disorders such as eczema, dermatitis and psoriasis, which often co-exist with asthma. If you are suffering from eczema, salt therapy will have a positive effect on the blood microcirculation of the skin normalising your Ph whilst killing bacteria and reducing inflammation.

After a series of treatments, clients show decreased itching, decreased or resolved scaling of the skin, with the drying and healing of small fissures and scratches.

Eczema is a general term for many types of skin inflammation, also known as dermatitis. The most common form of eczema is atopic dermatitis(some people use these two terms interchangeably). However, there are many different forms of eczema.

Eczema can affect people of any age, although the condition is most common in infants, and about 85% of people have an onset prior to 5 years of age. Eczema will permanently resolve by age 3 in about half of affected infants. In others, the condition tends to recur throughout life. People with eczema often have a family history of the condition or a family history of other allergic conditions, such as asthma or hay fever. Up to 20% of children and 1%-2% of adults are believed to have eczema. Eczema is slightly more common in girls than in boys. It occurs in people of all races.

Eczema is not contagious, but since it is believed to be at least partially inherited, it is not uncommon to find members of the same family affected.

What are the causes of eczema?

Doctors do not know the exact cause of eczema, but a defect of the skin that impairs its function as a barrier, possibly combined with an abnormal function of the immune system, are believed to be an important factors. Studies have shown that in people with atopic dermatitis, there are gene defects that lead to abnormalities in certain proteins (such as filaggrin) that are important in maintaining the barrier of normal skin.

What are the symptoms of eczema?

Eczema most commonly causes dry, reddened skin that itches or burns, although the appearance of eczema varies from person to person and varies according to the specific type of eczema. Intense itching is generally the first symptom in most people with eczema. Sometimes, eczema may lead to blisters and oozing lesions, but eczema can also result in dry and scaly skin. Repeated scratching may lead to thickened, crusty skin.

Eczema can sometimes occur as a brief reaction that only leads to symptoms for a few hours or days, but in other cases, the symptoms persist over a longer time and are referred to as chronic dermatitis.